An Interview with Matthew Savoca

One thing Publishing Genius authors are doing over the course of the year is interviewing each other in a chain. In this installment, Megan McShea talks to Matthew Savoca about his new book. [crossposted from PGP] 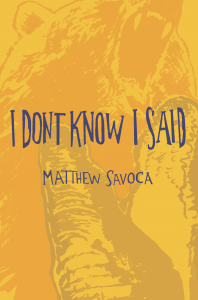 MEGAN: To start in an obvious place, I love the title of your book. I loved it more when I was reading it. It seemed like a kind of home-base for the narrator. Somewhere in there he muses that it's his fallback position. Did you know the title from the start? Or did that come later?

Hah. Just kidding. I say "I don't know" too much, but it's even worse with this narrator guy. Don't you want to just kick him sometimes? Yeah, I knew the title from very early on. It was just sitting there. Most of the time I start with a title. Like I start every day with the name Matthew. And then I go from there.

MEGAN: The only times I really wanted to strangle the guy were times when he was overly accommodating, like when Carolina's in the bank and he's waiting outside but he won't go get a soda because he's afraid she'll come out and wonder where he is. What kind of magical leash does she have him on?! But really, it only bothers me because it reminds me of myself at my most servile in relationships. I have to say, your novel had a real squirm-factor in terms of remembering some of the more pathetic moments of past relationships.

MATTHEW: He's just afraid of being a bad guy. He doesn't want to do anything that could put him in the wrong, and that's messed up. Because it's fake goodness. The kind thing to do for another person is let yourself be the fuck up half the time.

Jean Rhys always talked about wanting to "get things right" and that's what I had in mind with this book, which is maybe what that squirm-factor is all about. But I figure if I can make you squirm a little this time around, then I know you'll be back next time.

MEGAN: Don't get me wrong, I'm a big fan of art that makes me squirm. I figure it's doing something right if I'm a little uncomfortable. Your story manages to do that in this really quiet way, without resorting to the grotesque or melodrama. It just follows the thoughts of the narrator into all these places he hits his own walls. At which point he generally says, "I don't know." It's very honest.

Despite lack of melodrama, there's some vivid, memorable scenes in this book. Did you start with a collection of scenes and then map them out into a story?

MATTHEW: That's a great description of the book. I like that. Most of the stuff I wrote down in order, while it was fresh in my mind. Scott McClanahan talks about how when he sits down to write, it's game time. There's no exercises or practices. It's just sit down and go. I didn't start with a collection of scenes or even anything in my mind, really. I try not to think about it too much. I just start telling it and then fuss with it a little bit later, but not too much. I used to play ice hockey when I was in high school and most of the time when you're out there on the ice you're just going on your nerve. You grab the puck and race down and score and then you think to yourself, Who just did that? That's how I feel about writing things down. Frank O'Hara said the thing about going on your nerve. He said when someone's chasing you down the street with a knife, you just run. You don't turn around and yell, "Give it up, I was a track star for Mineola Prep!" (from “Personism: A Manifesto”)

MEGAN: I love that piece. My favorite line is the one about form: "if you're going to buy a pair of pants you want them to be tight enough so everyone will want to go to bed with you."

I like this idea of Rhys, getting things right. I can see how it worked its way into this book. The way the interactions and thought processes of the characters are spelled out so plainly, nakedly. There were so many moments that felt true to me, with all your detail about those spaces in between the big things that happen or get said between two people. The body language and the talking about nothing. And there are flourishes in there, too, but they aren't grand. They're very small, but beautiful little payoffs the readers gets for following the nuances.

My favorite scene, though, is when he encounters the streetlamp in the rain. It sort of seems like a moment of enlightenment. Elsewhere you mention Zen. Am I imposing something on the book, or is there a path to enlightenment story in there that you meant to tell?

MATTHEW: For a while there, back around 2007-2008, I was pretty into Zen so I'm sure it made its way into the book, and I think Arthur probably views himself as some kind of Siddhartha, but I never meant it that way. I mean, I never meant to tell anything. I just sat down and wrote the things out that were in my head. I think most of the time I saw it as scenes in my head, like in a movie, and all I had to do was describe what I was seeing. It must have worked too because I don't have any of those things in my head anymore. But, yeah, the streetlamp is my favorite character in the whole book. I love the streetlamp deeply, like that lady who married the Berlin Wall.

MEGAN: Yes, the streetlamp is a great character! Especially when it returns later like some lost love.

I've been assuming this is at least partly memoir, although I'm never clear why that matters. Am I right? And if so, do you think it matters?

MATTHEW: You know what I think is funny? Adam never once asked me that. I heard this great joke the other day: Why'd the chicken cross the road? Because the road crossed the chicken. Never cross a chicken, man.

I don't even know what memoir is. I guess it's someone saying here's a true story about a thing that happened to me. I don't think I ever tell the truth. I'm always trying to make myself look better. But, here we go, here's a true story of something that happened to me the other day: I was on the New Jersey turnpike and I stopped off to get gas, which you're not allowed to pump yourself in Jersey, and this guy in front of me at the pump didn't want to wait for an attendant, so he just started pumping the gas himself and then an attendant yelled Sir you can't pump your own gas here, Sir! SIR! And the guy just ignored him and went right on pumping his gas and the attendant eventually came over but just stood there and told the guy he wasn't allowed to do what he was doing. Over and over again just telling him until the guy was finished and then drove off up the highway scott free. And I sat there the entire time just watching this scene and thinking about the guy and I went from hating him for being a total jerk to almost admiring him for seeing it all the way through, even though he was still a jerk. I mean, what crazy hurry was this guy in? And then just a few minutes later, I passed by him on the highway and he was parked on the shoulder, just laying on the hood of his car with his arms crossed behind his head staring up at the sky.

But, see, that's not even true. I just made that story up right now.

Actually, it is true. That really did happen. Didn't it?

MEGAN: I really want that to be a true story. In fact, I look forward to a time when I've sort of gotten dislodged from the source of that story by the passage of time and can adopt it as my own, telling someone who I think might appreciate it that it happened to me.

I think that dispenses with the whole memoir question very nicely.

The verse from Ecclesiastes at the end is pretty spot on. At what point did you come across it? Or did you just happen to know it?

MATTHEW: Yeah, I know a lot of Ecclesiastes by heart. It's such a great damn book. I have been reading it for a real long time, so it's always kind of been in my head, but it was a real late addition to this book. I think Adam and I added it in there like a month or two ago. I wrote him an email one day after listening to an audio recording of Ecclesiastes in my car, and I said what do you think about putting this at the end of the book. And he liked the idea. I love Adam.

MEGAN: Tell me more about what it was like to work on the book with Adam.

MATTHEW: Adam is so goddamn great. I feel like he made I Don't Know I Said ten times better. I really mean that. He must have read it through a dozen times from a dozen different perspectives and he continually offered his suggestions, 99% of which I took. All kinds of things from cutting unnecessary sections, to just clearing up parts that were unclear, to making sure grammatical and dialogue issues were consistent, to rewording parts. Adam is the one who came up with the idea to divide the book into three sort of sections to help make the book's timeline a bit more clear, since there are so many starts and stops and restarts to this story. Adam came up with the titles to the three sections as well: The United States. The Ski Lodge. I Don't Know. Just that little addition right there made the book instantly a lot better and have such a better flow to it. Adam is really thoughtful and also just damn good at putting out books the way he wants to. We had a lot of fun with it. That's one of the best things about Adam is that things are always really fun. At one point he was staying at my place and we sat at the kitchen table at two in the morning, drunk, and talked for a long time about whether or not we should change the book to have Arthur kill Carolina at the end by poisoning her drink, and what that would do to the story. I could go on and on. I can't say enough good things about Adam Robinson. I just love the guy all around.