I’m here today to read you an essay about ribbons and also because I was invited. I wish I was better at singing, but I’m not even a fiction writer. If it’s recent and not something from the online Sheridan Libraries at a certain university whose name I don’t want to say at the risk of sounding snobby, I probably haven’t read it and will probably not be a good conversationalist after the reading if you ask me about this book or that book, I just want to say that up front because I am planning on trying to socialize. Also I realized after I wrote this that it’s all about me and a lot about my family. For a while I’ve been trying to be okay with honesty in writing and reading—I used to do a lot of reading from inside things or in front of things, but here we are in real lives and my one real life inhabits every corner of itself and I don’t have anything else to investigate or I don’t need anything else to investigate or I am trying to tell the difference between the two, so what better way. I’m sorry to be so confessional; I hate that too. There are parts with no ribbons, and I’m also sorry about that, except that there is a thread, if ribbons can have threads, of course they do, ones that fray when you pull them apart.

Lauren Bender is a teacher, student, and twin living and working in Baltimore. Publications include The Dictionary Poems: Some Bees (New Lights Press), Whale Box (Publishing Genius), [there is no YOU in poem] (Big Game Books), and I'AM BORED (Produce Press, with Kevin Thurston). Selected exhibitions/performances include CorpOreo (Transmodern Festival) and Big Pink (The Baltimore Museum of Art). Lauren curated the BOITE: Show&Tell series at Minas Gallery in Hampden and is co-director of Narrow House. She feels pretty good lately. 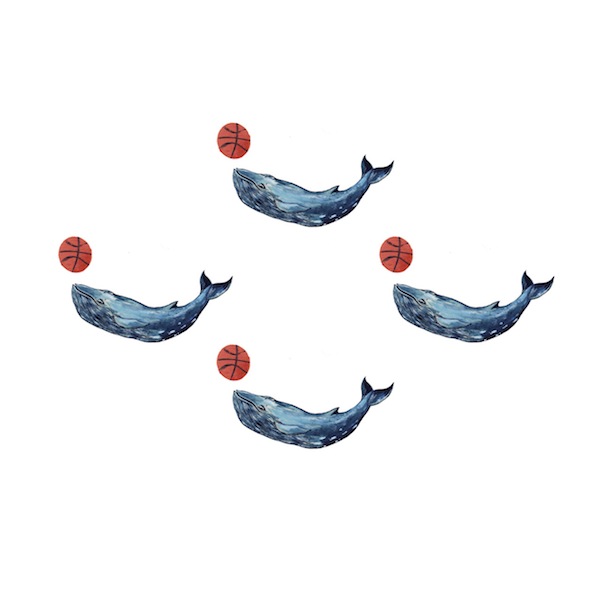 Na Kim is an artist and designer from Brooklyn.

I killed a stinkbug by drowning it
in lavender lotion from Anthropologie. All

around, the vintage suitcases I collected
during the dark times. Up with the crinoline

& the linen curtains that make us feel safe
with good taste. Sailor pants in the

pictures on the internet from their phones.
Girls speaking in videos about their

plastic drawers filled with shimmers for
the eyes. Those wavy lines televisions

never get anymore. My shorts are too
short but also not short enough,

not for this place, this night, this
crawling sense I wear with

claws. All these t-shirts of alma maters
& sodas with straws floating up

while I'm still blueing my way in,
& then out.

Carrie Murphy's first collection of poems, PRETTY TILT, was released by Keyhole Press in 2012. She received her BA from the University of Maryland and her MFA from New Mexico State University. Her chapbook, MEET THE LAVENDERS, appeared in 2011 from Birds of Lace. She works as a teacher and freelance writer, and is in the process of becoming certified as a birth doula.

The Year I Called Him Alex

We moved his Alexithymia from one room to another, each time his face cracking slightly under its marble. Week after week, I manhandled it, rubbing my bluing tips over the tick-tock veins. Four weeks in, he looked like Roquefort; at five weeks, like Alexander. In the evenings, I could hear the crumbling, his pasty hands hiding the rebuilding. Sometimes I took it for the rustling of wall-bound mice; other times I started from sleep and yelped. “Dog” he would exclaim and patting my head put me down to sleep. How I slept, I don’t know. Most likely on my side. There I could hold onto the edge of the bed, the only solid surface in the whole goddamn house.

Nadxieli Nieto Hall is the Managing Editor of NOON, and lead book designer and editor at Nieto Books. Formerly, she was the Editor-in-Chief of Salt Hill Journal. Her writing has appeared in The New York Tyrant, West Wind Review, Dirty Durty Diary, Clamor, and Washington Square Review, among others. She lives in Brooklyn.

Mom plays the cassette of someone singing happy birthday to me with my name. On Saturday there are cartoons to be had and I am ten. I grow. Tapes are traded for C.D.‘s, M.P.3’s, 401k’s on a long enough time line.  Mom can’t sing happy birthday and I grow older.
We celebrate a daughter’s birthday. The wife chooses the cake. She makes it from scratch for us and we put five candles for five years on it and light them. I am alive and lit, a shine of fire from candles are wishes for a daughter to grow strong, willful, compassionate. I am alive and then the room is lit. It dims and she blows on them with lungs, with life. Life is chocolate and three-layered. She turns to me, “Daddy, when are we going to celebrate your birthday?” I tell her I am too old for birthdays and can‘t blow candles out like she can. She laughs. She asks, “What would you want for your birthday?” I say I want her to be happy. She opens presents.
A mother sneaks into a teenager’s bedroom the last time she’ll be allowed without knocking for the rest of a lifetime. Life is this, three women and layered. It is layered in age. She hits play to life, the dog waking downstairs. I am alive and have coffee for the first time. I hit play. I go back and kiss her on the forehead before leaving the house. I am sixteen and going to work.
My little angel turns to me, opening her first present. “Dad, how did you know I wanted a baby doll? Does she have make-up and clothes and stuff like mommy does?” I slide from the table rubbing my hand between my eyes and forehead at the kitchen sink a room away.       “Mommy,” I whisper.
The wife cuts the cake. Long days at work and I cannot cut the cake, so my wife cuts the cake. We are behind on a mortgage and single utility and have triple layer chocolate cake for a daughter’s birthday. At night, pillows whisper, 'you know we can’t afford those things.'
But the daughter is happy and turns five once. We age in different ways, in layers. In the mirror that morning, I am awake. There’s a gray hair I pluck from my beard. I hit play, again and again. The bathroom is lit and so am I. It’s what the electric company wants. It is why they are here. While the wife sleeps, the daughter sleeps and I sleep inside them. “This is what I have grown,” I think beside the bed. I pray there. I put on my coat at the door, the shoes for work. They are tied and so am I. I am alive and awake, tying these things. I married Julie and tied, got retirement and college funds and still I tied. Thirty-five, I keep the heat on because sleeping inside the women I know, tied in their hearts and minds in November the world is not as warm, not as caring.
There’s random tragedy somewhere. And it is massive. I hear about it on the radio. I get e-mails from co-workers. I hear friends watching it on the news and ask what kind of tragedy it is. “Tell Angie happy birthday for me,” they say.    Through my front door, the tragedy lifts off shoulders. Angie and her cat meet me there. She hugs my leg. “Can I have another birthday?”
“Can’t have too many,” I smile. “If you did, you’d forget each one and forget the meaning of birthdays forever.” There’s a woman I know. There’s a cruelty to the world I know.
“Forever?” she asks.
“Yes, that would be forever,” her grandmother whispers behind me.


Bowen is a culinary student and chef by day, writer by night. His short fiction has been included in Hobart, anthologized by Flash Forward, and appeared here in Everyday Genius previously, among others. He also blogs and runs a chapbook press Burning River out of his hometown of Cleveland, Ohio.