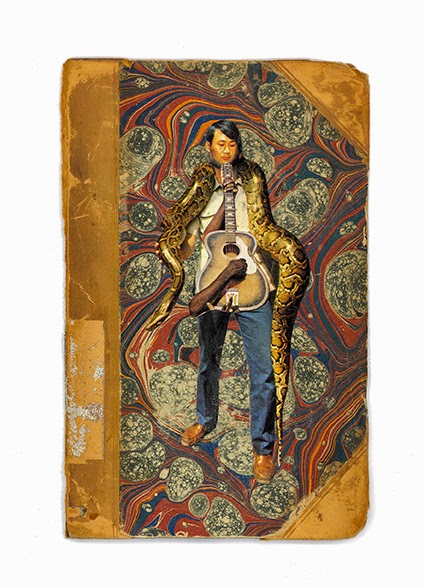 When I was about five, my parents joined a snake handling sect of Christianity. My mother tells me that it was an attempt to save their marriage for the sake of me, their only son. They figured that if they could tap into something extreme, but spiritual, it would energize both of their lives.

Just wait. Wait for the insane, illogical shit you'll do for the sake of the people you love someday. I can feel my own bouts of madness coming on already.

Of course, it didn't work. They didn't feel connected to God or whatever any more than they had before they started draping snakes around their shoulders.  Like most things, it became a chore that was tolerated until an exit presented itself.

But I remember the family that ran this fucked little church. They taught music lessons on the side. The father taught guitar and the mother taught piano. I was forced into their piano program.

I would sit on the piano bench, only half paying attention to the lesson at hand, and I would sneak glances into the living room where their young daughter would always be toiling away in a notebook.

Her name was Mariana and she was only a few years older than me. Sometimes after my lesson was over we would each get a freeze pop in the kitchen and she would show me her notebook.

It was the foundation of a personal religion she was building from the ground up. Big secrets. Her own Bible, stitched together from scraps. I would watch her pour over its entries and try not to stare at the snake bite track marks dotting her arms.

Her father had moved them from Osaka to Munich to Cleveland to Jersey. There's no sense in a series of international dance moves like those. The joy of standing in one place is overtaken with the constant mystery of travel. All mysteries go to the state of New Jersey to die.

So bold with her handwritten bible.  I flipped to the back page of it once. Just blood, the smell of ground pepper, and a spiraling equation. I don't fuck with math so I don't know what it all added up to.

I flipped to the middle of it once, too. It was an illustrated entry entitled, "One Personal Hell for Mr. Matthew Robert Bookin." The picture looked like me, but older.  Probably creeping towards 30.  I'm sitting in the basement of my parent's house, weeping into a bong held between my knees. I have a Dunkin Donuts uniform on. The walls are covered in black light posters.

Yes, Mariana. That would be hell. What sort of reptilian poison blossomed that into your brain?

My family moved from New Jersey to Upstate New York and left it all behind. This is comparable to closing your eyes, announcing you will now be in a completely different room, and then opening your eyes.

But, at some point over the years my mother heard that Mariana's father spontaneously burst into flames in some bogged out swamp down in the southern states. They say that anyone unlucky enough to breathe in the exhaust from his funeral pyre was cursed to a lifetime of shopping mall dreams.

All this time has passed since then. Jersey distance.

No more visions of kissing the young priestess behind the makeshift church; right next to the snake pit.

Now. Endless cults. I join a gym. I renew my library card. I lift my aching hands up to the sun.

I have avoided my own personal hell with little rituals and the knowledge of when to keep my mouth shut.

I love to sleep in on Sundays.

I love the fistfuls of bleeding blackberries I've eaten to get my swagger back.

I love all the little escape routes I've tunneled out of my own brain.

Good lord and goddamn. My cup runneth over.

And I don't suppose it's too late to learn how to play the piano.