EAT | READ will be a weekly beat on the new website RealPants.com (more info here). It will be produced by our Food Editor, Kristen Iskandrian, and Executive Editor Amy McDaniel. We will feature an EAT | READ post here on EAT GENIUS every Tuesday as a lead-in to the Real Pants launch on January 1. Kristen's intro to the beat is below, followed by today's post. 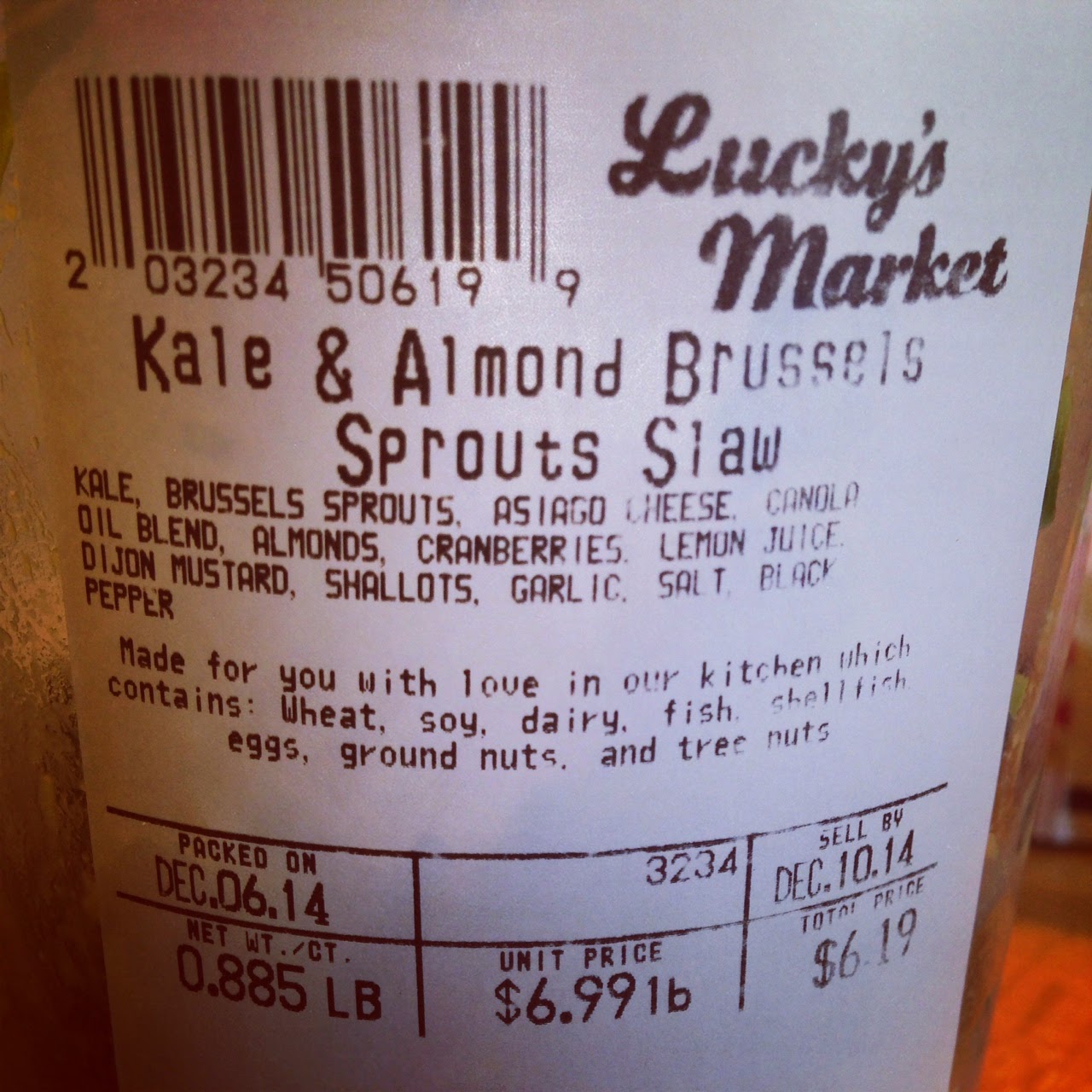 What we've been eating: Leesa
This kale and almond brussels sprouts slaw from Lucky's b/c it's delicious and also b/c it magically counters the donuts/cookies/cakes I am eating/making/baking this Christmas season. Right? Right?! I believe in Baking As Therapy. Kale and almond brussels sprouts slaw and my Baking As Therapy sweet treats. Yesterday was chicken and dumplings and tonight is lasagna with spinach and ground turkey. Winter comfort food forever. 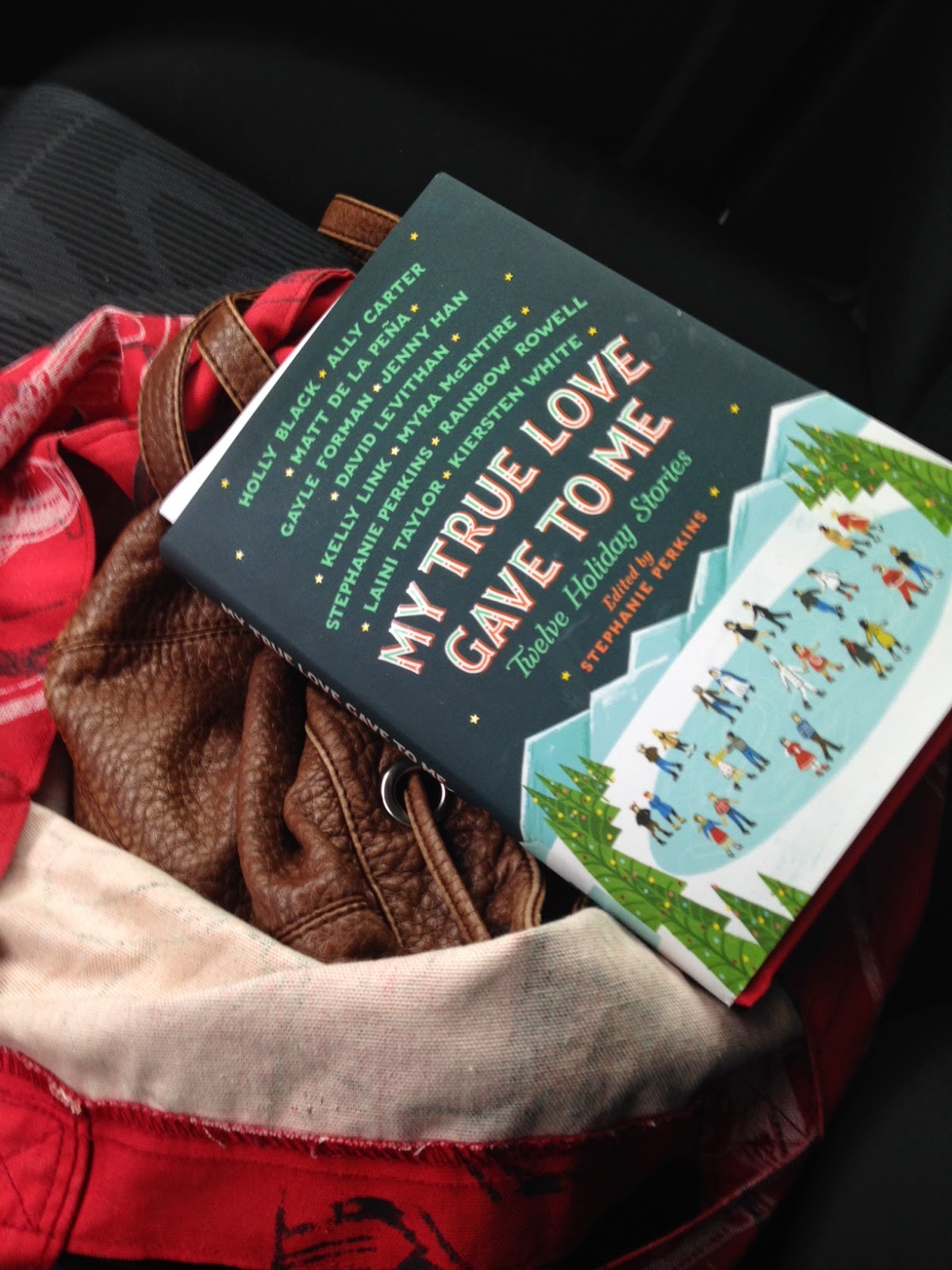 What we've been reading: Leesa
MY TRUE LOVE GAVE TO ME: 12 HOLIDAY STORIES a YA Anthology b/c I love cozy stories and Christmassy stories and I read the first one called MIDNIGHTS by Rainbow Rowell in carpool line, waiting for my kiddos to get out of school and CRIED INTO MY HANDS at the end of the story b/c it was so perfect. Midnights and snacks and dancing and boys and girls and feelings and kisses. It's a little hardback book and even the paper feels good. Such a treat to read. 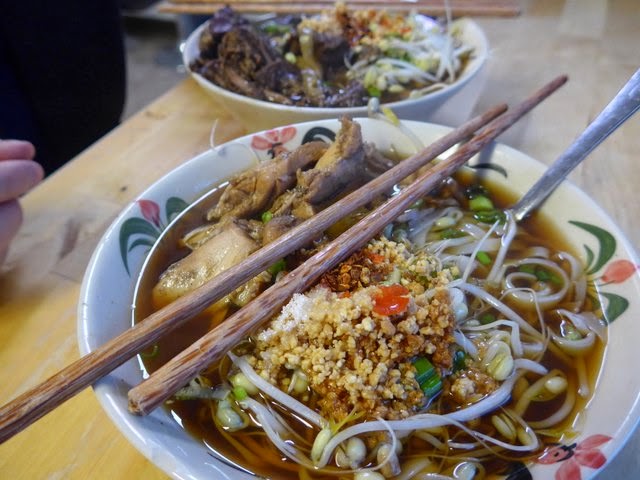 What we've been eating: Justin

Well I just got back from this trip to Iceland that I took with my girlfriend--now fiance!--Amanda. We went for a vacation in spring 2013 and fell in love with the place, so we were excited to have the chance to return again this year for the nominally legit purpose of some research I needed to do on my next book, plus a little journalism work I ginned up since we were already going. We ate some great Icelandic food--including lamb, smoked puffin, and the insanely grand tasting menu at Dill--but one thing I always like about traveling is to see how foreign places do food that is foreign to them (Lebanese food in Hong Kong, say, or Italian in Japan). Since Iceland has some of the freshest, best fish on the planet, the sushi is awesome there. At an unassumingly named restaurant called Fish Market we had what might be the best sushi I've ever eaten in my life (and I will add here, not to boast but simply to drive the point home, that I've been to the Tsukiji market in Tokyo). Every piece was perfectly formed, and the flavors were delicate and clear. This was also where we ate the puffin--which is not served raw. If you're ever in Reykjavik, this place is worth treating yourself to.

Since we'd treated ourselves to Fish Market *and* to Dill, we were pretty much out of treats for the rest of the trip. At a place called Hradlestin we ate good unfussy Indian food: lamb vindaloo, naan, a couple other hearty basics. Their business seems to be mostly takeaway, but they had a couple of tables and let us sit. But the best cheap meal we had was at a place called Noodle Station, about two blocks from where we were staying. They make Vietnamese noodle soup: chicken, beef, or veggie. That's all they do. The entire intersection where they're situated smells like Vietnamese noodle soup; our mouths watered every time we walked by, for almost a week, and we kept meaning to go and then not going. When we finally got there--our last meal in-country, taken an hour before we had to leave for the airport--we were unsurprised to find that Noodle Station tasted every bit as good as it smelled, and then some. I'm almost glad we left it for the very end because if we'd tried it sooner we'd have gone back every day and missed trying other things. But it's a place I would--will--go back to in a heartbeat, and if you find yourself out Reykjavik way, you shouldn't miss it. 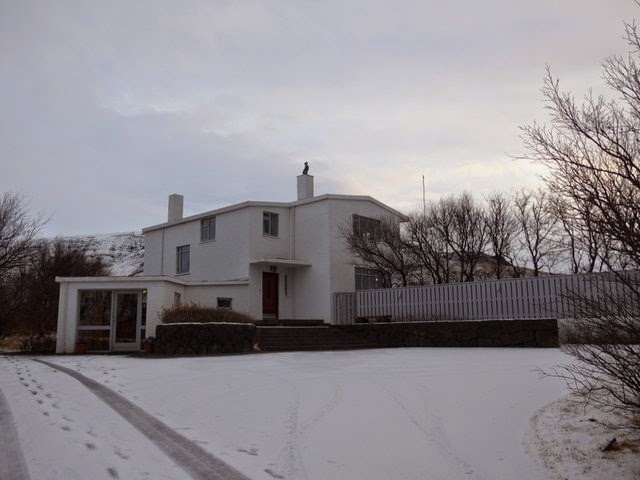 What we've been reading: Justin
As you might have guessed in light of the above, I've been reading some Icelandic literature, specifically the novels of Halldor Laxness and a variety of work by my friend Andri Snaer Magnason. The most recent Laxness I read was THE FISH CAN SING. It's good, but my favorite is still INDEPENDENT PEOPLE. We visited Laxness' house, Gljúfrasteinn, in Mosfellsbaer. When I get the chance I'm going to read WORLD LIGHT, which I understand is about a poet, and I have a real soft spot for novels about poets. Of Andri's work, the novel LOVESTAR is the easiest to get your hands on (I wrote about it recently for Barnes & Noble) but I've been enjoying his Bonus Poems, which have never been published in English before--though we're hoping that will change soon.

Since everyone is making year-end lists, I've been reading those, which inspired me to make one of my own. I wrote it spontaneously as a series of tweets, but then at a friend's urging gathered it into a proper list, which I posted to my tumblr. Having had a few days to sit with it, I feel good about it, but realize I left a few things out. First, I mentioned Martin Amis's TIMES ARROW, which I just read, but I did not elaborate on why I liked it so much. In brief, it is one of the most aesthetically powerful novels I have ever read, and one of the most acutely moral, too. I also want to mention Rebecca Solnit's MEN EXPLAIN THINGS TO ME and my friend Adam Wilson's WHAT'S IMPORTANT IS FEELING: two great collections, hers essays and his fiction, both from the first half of this year. They don't seem to have made their way onto many lists, but both books impressed me enormously when I read them. Solnit said many things that people--and not just some abstract notional public, but me, this male person, specifically--needed to hear and understand. Adam's one of the funniest writers I know, yet his stories are some of the saddest I've ever read. He feels deeply for the fucked-up and the fucked, striving losers and grim self-detonators alike. I just visited him this weekend at the James Merrill House, where's he in residence, and I got to preview a bit of this new book he's working on. I can't tell you anything about it and I have no idea when it will exist--but holy hell it will be something. He also evangelized me re Thomas Mann's THE MAGIC MOUNTAIN and Christian Wiman's Ossip Mandelstam translations. I haven't actually read either yet, so I guess I'm failing utterly to answer your question, so I'll cut myself off here, but ask me again next year and with any luck I'll be able to put them on the list.