“The object of the Woman’s Club of Chevy Chase, founded in 1913, is to promote the welfare of the Community and of the State of Maryland.” The object of “What’s Cooking in Chevy Chase,” the cookbook the club released in 1969, was “to promote civic and economic interest”--but also maybe someone’s husband had stock in almonds, water chestnuts, or paprika, because the women of Chevy Chase were apparently awash in them. 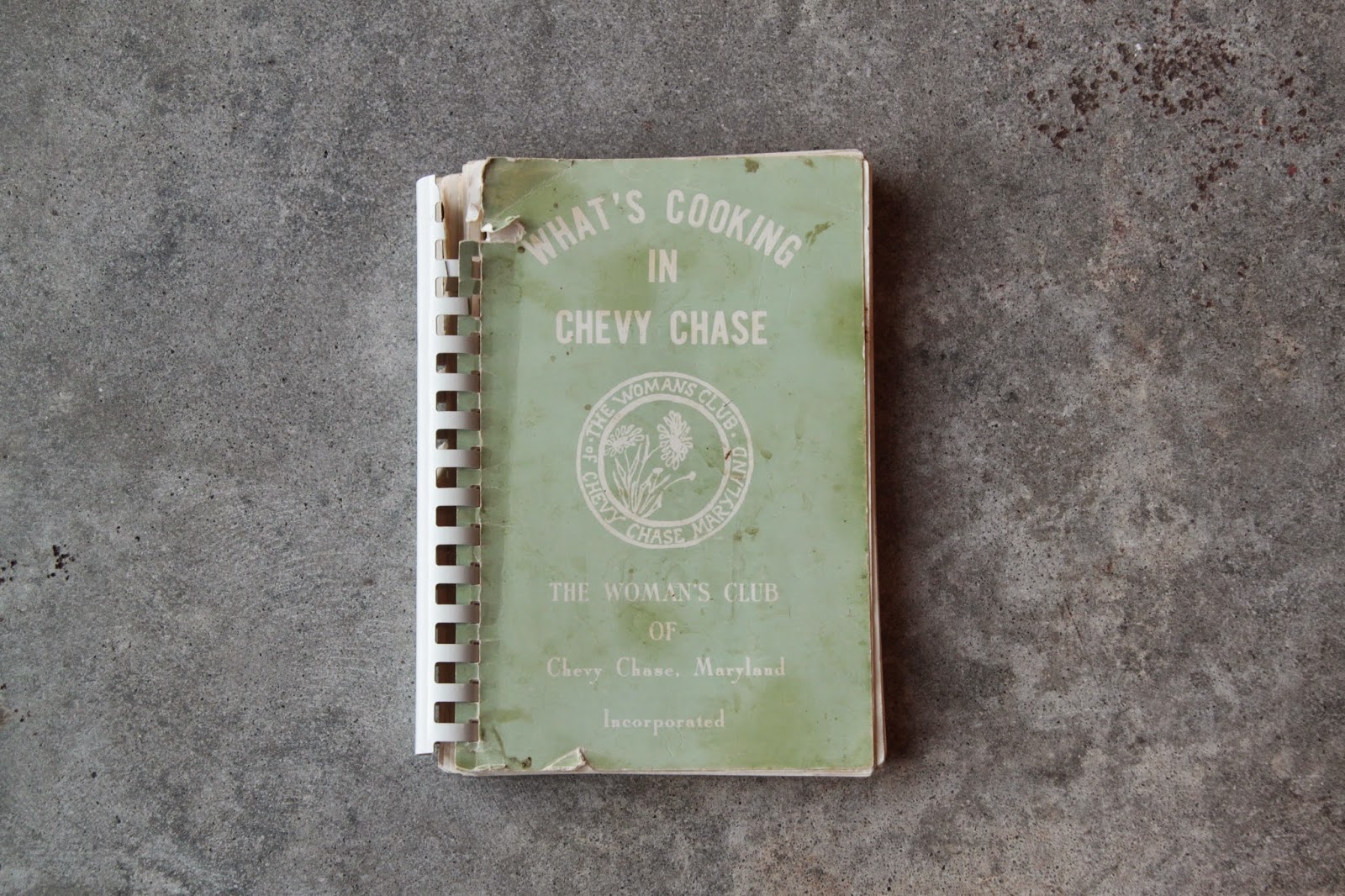 The community cookbook was and is a fairly typical eleemosynary pursuit (1)—the Woman’s Club’s Building Fund wasn’t going to fill itself! Perhaps early success with a 1964 Easy-See large-print cookbook for “partially sighted” children (2) didn’t prepare the women of the club for the slog that awaited them with this edition. In their foreword, editors Virginia Epperson James and Mary Kathryn Ambler thank “our typists, four Club members and one devoted husband,” as well as “our families whose kind understanding helped us through a busy, often frustrating, but always interesting experience.” I mean, listen guys, I wasn’t there, but it seems to me that “What’s Cooking in Chevy Chase” is CONTEMPT! And far too many dishes containing gelatin!

I lived near Chevy Chase for a couple years, and aside from a few estate sales and a particularly abrasive trip to the Trader Joe’s where I made peace with never having (loud, precocious, insufferable, Joe Joe’s Cookie-demanding) children, I rarely spent time there and the place never gave much of an impression. My friend Will: “Going to Chevy Chase is sort of like eating a couple slices of wonder bread except with more speed traps.” Will also has a story about the Chevy Chase Trader Joe’s:

In college we used to dumpster dive at Trader Joe’s, and one time my friend who was a hippie fell into the dumpster that Trader Joe's shared with the honey baked ham store next door and got his feet into a leftover honey ham and his already-gross feet smelled like honey ham for the rest of the car ride home.

Recipe titles in this book are in all caps, which I will not reproduce here, though CUCUMBER VICHYSSOISE is a terrific expletive. One recipe title is an improbable command—Mock Enchilada—and the name of “Gentleman’s Delight (A Casserole Dish)” reads like an R. Kelly song. (“Maiden’s Delight” contains corn, cheese, chicken soup, and a pound of ham. Guess “Maiden’s Bewildered Colon” was too on the nose?) The chicken and spaghetti casserole includes “a few drops of yellow coloring for better color before baking,” which evokes visions of a creamy pasta dish that smiles down benevolently on us all, giving us vitamin D and potentially gout.

The Woman’s Club of Chevy Chase writes, Borg-like, “We know our favorites will become your favorites also.” To be fair, I could eat pounds of Deviled Cherry Tomatoes, which contain deviled ham, cream cheese, and minced onion. “Put a decorate mound of the ham-cheese mixture on each; chill” the recipe suggests, evoking both craftsmanship and “Point Break.” 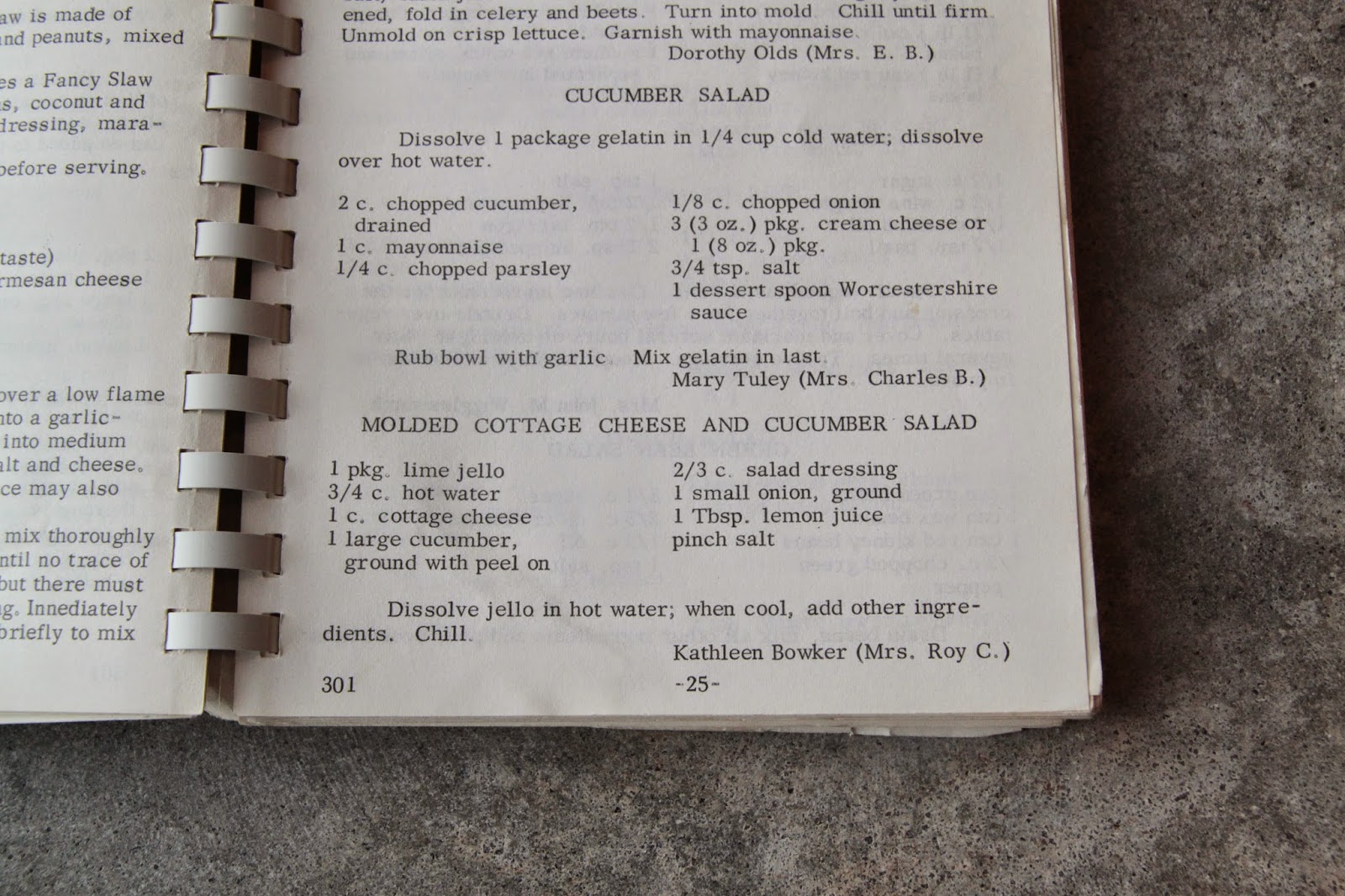 But all the decorated mounds of a ham-cheese mixture in the world can’t negate the existence of Quick Tomato Aspic. (As if the amount of time you put into an aspic is the problem!) It’s hard out there for a mid-century cookbook editor, and you can see why it would be “often frustrating, but always interesting” to taste-test Golden Salad, which contains gelatin, mayonnaise, “hard-cooked” eggs, celery, and sweet pickle. Cheese Gelatin Mold contains cream cheese, blue cheese, and a cup of orange juice. Just reading the title for Molded Cottage Cheese and Cucumber Salad makes me angry.

Other Recipes in “What’s Cooking in Chevy Chase” That Make Me Angry, or, Mid-Century Dishes I Would Serve To My Worst Enemy:
Tang-y Beets (Beets+Tang, basically.)
Creamed Celery and Pecans
Grape-Nut Pudding
Jellied Veal Loaf
“My Mother’s Favorite Lima Beans”

In 1976 the Woman’s Club of Chevy Chase released the “Second Serving” of “What’s Cooking in Chevy Chase,” which contained a recipe entitled “How to Preserve a Husband.” “Do not pickle or put in hot water,” it says. “This makes them sour.” And don’t let him put his foot in a honeybaked ham. That way lies madness. Which, presumably, has been cooking in Chevy Chase all along.

(1) “What’s Cooking in Chevy Chase” was one of many fundraiser cookbooks printed that year by North American Press of Kansas City, Inc., the “largest publishers devoted exclusively to women’s groups in the United States and Canada.” They printed a cookbook benefitting the Missaukee Fire Department Auxiliary in Lake City, Michigan called “No More Burnt Offerings.”

(2) “WAYS TO MAKE SOUP INTERESTING,” the headline of an excerpted page screams at you. One method? “Frankfurter slices for green pea, creamed chicken, or celery soups.” May your taste buds never live in interesting times!

Brooke Hatfield is a writer and artist who sees aspics as the villains of any cookbook they inhabit. She's working on a project about old cookbooks for 421 Atlanta that will drop (do books drop?) in fall 2015.