Christopher Newgent and No Heroics, Please

Two songs from No Heroics, Please:

And a description of the project:

Credit where it’s due: the concept for The Lion/The Lamb was originally an idea of my friend Alan Milner, guitarist and singer for Canterbury Effect, a band from my hometown of Brazil, Indiana. We spent the better part of our high school and college years playing in bands that satellited each other, and at some point in our friendship, Milner mentioned his idea for a record release bearing the same title. The idea was simple—a split vinyl with Canterbury Effect filling in the grooves of The Lion side with their heavier, post-hardcore sound, and another somewhat more mellow band etching out The Lamb side.

Toward the end of my music career, I played guitar in the instrumental band No Heroics, Please1, featured above, and there was talk of rehashing the idea to make it happen. Long story short, it didn’t. But about two months ago, I couldn’t sleep.

With my drive for music on an indefinite hiatus from the bang and whimper that was the end of No Heroics, the concept of The Lion/The Lamb continued to nag, until one ceiling-staring night, it morphed into what is now the concept for this poetry collection. My goal is to maintain the feel of the book as a vinyl—the warmth, the pops and hisses and scratches, and ultimately, a publisher who is willing to play with the design element of a two-sided book, so when the reader is finished with The Lion, s/he flips the book over to start The Lamb as you would a record.

Conceptually, the collection is still fleshing out, and beyond the obvious metaphors of music/rhythm/poetry/language, music hasn’t played a very central theme to the writing so far. The idea of the collection as a whole is less than two months old, and I imagine the shape of it will truly take as I write each poem and carve out the final manuscript.


1We even sent a copy of our first record to Tess Gallagher. It was shameless, and as you’d expect from Tess, she handled it with much grace: 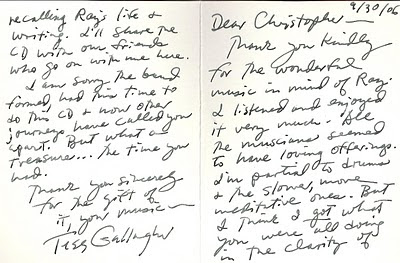