For her week of Everyday Genius, Amelia Gray has composed five very short stories based on these constraints that I provided, with the understanding that she would start each day immediately after waking:


Day 1: Write under the table.
Day 2: Do you have a couch? It would be funny if you tried to squeeze yourself between the couch and the wall. If you don't have a couch, your biggest chair would do.
Day 3: Standing in the shower, clothed, trying not to be hit with water.
Day 4: In bed, with your head at the other end (if you can sleep this way the night before, too, that would help a lot).
Day 5: While sitting on a small stack of AM/PM.

Amelia reports that she followed the rules (and almost died in the shower because of it), writing each story entirely in the prescribed place.

She also collected sounds to accompany each story -- though I think this was done at a more traditional desk setting.

And here's a photo of her notebook, in case you're interested: 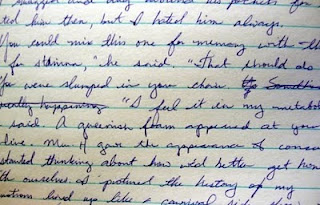 So tune in all this week to read the stories and listen to their soundtracks.
For now, check out these videos that Amelia collected for the stories but eventually decided not to include. As the week goes on, see if you can figure out which stories go with which videos.