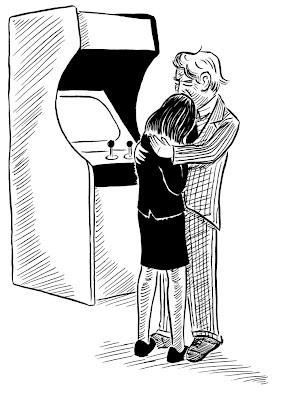 In the early-1980s, in an old bread factory in Greenmount, a local real estate developer built a video arcade for his daughter, who was two months away from earning her M.B.A., an arcade which, when fully established, would have touted the most game consoles, not just in Baltimore, but the whole Eastern seaboard. It would have offered visitors 376 coin-operated machines, arranged on three floors plus a mezzanine level-all to be built in a matter of months. Before the game consoles were installed, the infrastructure for a full entertainment complex had to be constructed, including handicapped-accessible rest rooms and a full snack bar in which popcorn, hot dogs, and pizza could be prepared on premises. All of this was built inside a factory that the real estate developer discovered late one night after taking clients from Miami out to dinner and drinks, when they were lured to it by smell of fresh bread, a few loaves of which the men loading the delivery trucks were willing to share with the men in suits. Nine separate unions were engaged in the project at one time, which was necessary to convert the bread factory into an arcade in such a brief period of time. In the week leading up to the arcade’s opening, the real estate developer’s daughter was arrested on murder charges, accused of killing another woman in her business school class. It was a well-publicized trial that resulted in a guilty verdict and a lifetime prison sentence for the developer’s daughter. While his daughter was being tried, the developer decided to stall the arcade’s Grand Opening, and once the verdict was passed down, he abandoned the project all together, paying the contractors’ bills in full and shutting the arcade to the outside world. He had the old bread factory locked up tight with 376 unplugged and unplayed arcade games sitting inside of it. Recently, a friend of mine, a commercial real estate agent, acquired the keys to the long dormant factory, and took me inside of it. The expanse and desolation was astounding for a closed and contained space. The snack bar sat quiet and untouched on the mezzanine and, apparently, most of the arcade games had been sold, although the Ms. Pacman terminal remained and was plugged in, whirring and singing softly in a corner lit by its own screen.

John Dermot Woods is the author of The Complete Collection of people, places & things. He has a collection of comics, and collaborative novel, and a comic chapbook (from Double Cross Press) forthcoming in 2011. He edits the arts quarterly Action,Yes, organizes the online reading series Apostrophe Cast, and co-hosts the Soda Series in Brooklyn. He is a professor of English at SUNY Nassau Community College.