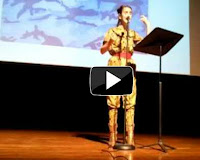 At an Andy Warhol-themed Literary Death Match, Stephanie Barber performs a poem she wrote for the occasion called "Who Got the Tuna." The recording starts late, after the poem explains that they are at a deli counter where the server continually calls out the titular line, until the patrons start to sway along . . .

Publishing Genius released Stephanie Barber's lecture, "For A Lawn Poem," as the third installment of what was then called "This PDF Chapbook." In September of this year, we re-released her DVD/book, These Here Separated.