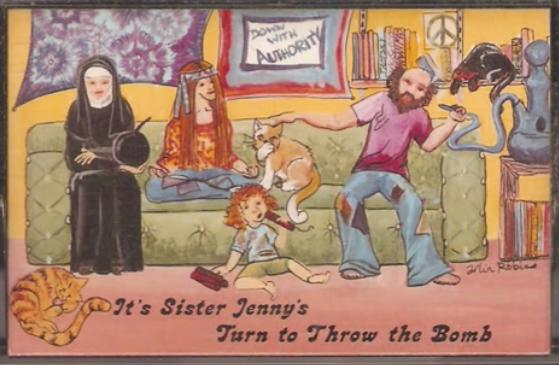 THE LAKE OF THE OZARKS
Twenty years ago, my little sister Jenny was three years old, and all the way to the Lake of the Ozarks, she only wanted to hear songs that had her name in them, and she wanted to hear those songs over and over again. I was seven, so while our parents sat as far away from each other as possible up in the front seat, I sang "What Will You Wear Jenny Jenkins," and "Jenny’s Gone Away," but mostly I sang "It’s Sister Jenny’s Turn to Throw the Bomb," because that was Jenny’s favorite. At Wall Drug, she’d spent a quarter on a lime green water gun. She worked at that trigger furiously, but only succeeded in drizzling warm water in my face, one teaspoonful at a time, all the way across the country. Jenny didn’t know what any of those songs meant, and she didn’t care either.
It was my job to indulge Jenny, but when we got to the Lake of the Ozarks for my Great Aunt Mina Dill’s seventy-fifth birthday weekend, the lake turned out to be an enormous man-made cement pit, full of desperate pedal boats struggling in the dubious water, and moldy cabins on the shore, and my acned older cousin, Sport, sitting alone on the dock all day, drinking Shasta Cola. He sat at our Great Aunt’s birthday dinner with his overgrown elbows resting on the table. “Mabel, Mabel, strong and able …” said Aunt Mina Dill, and Sport shifted those elbows squarely to the center of his empty bread plate, rested his chin in his hands, and refused to make eye contact with anyone.
Sport even refused to make eye contact with me, and all I wanted that summer was for someone to tell me I would grow up to look like the woman at the beginning of Columbia Pictures, tall and robed, staring out to sea, imperious and virtuous and lonely, scepter in hand. Especially the scepter. I really wanted a scepter, and Christmas was far away.
But this story isn’t about me. It’s about my sister Jenny, who, when she turned five, came to understand the macabre lyrics of "It’s Sister Jenny’s Turn to Throw The Bomb."  She began to howl and cry each time she heard the song, and in response, I sang it to her even more often. I even learned to play it, in a rudimentary sort of way, on the family ukulele. Jenny had nightmares all that year, but she and I each had our own room now that Mom had married Dirk, so I didn’t care much that she never slept through the night. Besides, that October Jenny’s pediatrician noticed that Jenny wasn’t growing, and then Jenny’s kindergarten teacher found she couldn’t seem to learn her ABC’s or her numbers up to ten the way the other kids could. So really, I don’t know how much her nightmares had to do with that stupid song.
It’s hard for me to say this, but Pete Seeger is on our Death List for 2008, Corrine’s and mine. We make one up every New Year’s Eve, from eleven-thirty to midnight. A list of our predictions for who, sadly, will die the following year. Corrine’s my upstairs neighbor. We’ve both lived in the building ten years now. We get along okay, she and I. Her face has that shiny, cakey look of too much work and not enough to show for it. Yesterday, she told me, “You should try this dog shampoo as laundry detergent. I swear by it,” like she didn’t even remember what she told me Wednesday morning, which was, “You should wear a girdle. I swear by it.” I didn’t bother to tell her she’s the only one who needs either of those things. I don’t even own a dog.
Corrine and I spend most holidays and weekends together, though a lot of the time when she talks I only pretend to listen, and I know for a fact (though I would never tell anyone) that her cupboards contain the exact following: One jar of jelly made with NutraSweet, one box of stovetop curry stuffing, and three cases of vanilla-flavored Slimfast, and that’s it, except for possibly some spices.


This past New Year’s Eve, Fidel Castro made the list, as well as Ozzy Osbourne, the entire cast of Rent (in a plane crash), and Pete Seeger. It didn’t matter that Corrine didn’t know who he was. He was my pick. I don’t know what I’ll do when it happens, it’ll be so sad.
It was about a year ago now that I saw Pete Seeger at the Old Songs Festival out in Altamont, New York. I know he’s an icon and everything, but I walked right up to him and shook his hand. He admired my ukulele, and I asked him about "It’s Sister Jenny’s Turn to Throw the Bomb."  I asked if he knew who wrote it, who originally sang it, or how old it was. I told him that it was my little sister Jenny’s favorite song, and ever since she died fourteen years back, I’ve been wishing I knew where that song came from. My dad was the one who taught it to us, and he took the secret with him when he left my mom. My mom and Jenny and me. I figured if anyone would know about that song, it’d be Pete Seeger.
But he had never heard it. When I sang it to him, he didn’t even recognize the tune.
“I’d probably place it as a novelty song from the twenties or thirties,” Pete Seeger said. “It’s a fine song, that’s for sure. A fine song, and a funny song. And I’m sorry for your loss.” But that could mean anything. I shook his hand again, and left quickly through the crowd.
To put it plainly, Pete Seeger did not look so good. He’s nearly ninety years old, and his voice is failing. Like I said, I shook his hand once and then twice, and each time, it was just bones all mashed together under skin, and he was not steady.
But this story isn’t about that. It’s about why I put Pete Seeger on the Death List for this year. I put him on the list because he’s the one person who I can’t imagine dying. Not ever. And I never want him to. I try to imagine that if they found a cure for dying, I could personally administer it to him. But even as I see myself measuring a healthy dose of the newest anti-death immunization down Pete Seeger’s throat, I know it’s just bullshit. It’s as simple as this: I had to put him on the list because everyone, every single person dies, and more than that. They die all over, and they die all alone.
I can tell Corrine needs to get out of her apartment for a few days. She mostly just sits at her kitchen table, and it’s not even a real kitchen table, but a piece of white plastic patio furniture. I forgot to mention that she also keeps cans of tuna stored beneath her sink, and she eats so much of it that I think she’s developing mercury poisoning. What I mean is, her hands shake. I think what she needs is a real vacation. One weekend this spring, we’ll rent one of those cabins they have, three nights dirt cheap, on the shore of some duck-shit lake. We’ll go the Lake of the Ozarks, except this time, I’ll get it right.

Madeline ffitch was a founding member of the punk theater company The Missoula Oblongata with whom she wrote, performed, and toured to post offices, grocery stores, farms, and warehouses. Her work has appeared in The Chicago Review and on Chuckwagon Press. Her play, Debris Upon the Forest Floor, produced with the weaver Elspeth Vance and the musician Jordan O Jordan, was catalogued in the 2012 Emergency Index, a project of Ugly Duckling Presse. Originally from Portland, Oregon, she now lives and writes in Appalachian Ohio where she homesteads and raises ducks and her small son, Nector Vine Ballew. ffitch's collection of short stories, Valparaiso, Round the Horn, will be available from Publishing Genius in December.