Booze Letter
a selection from Eat, Knucklehead: A Cookbook

Eat, Knucklehead is a cookbook by Craig Griffin written as a series of letters from a father to his twenty-something son, accompanied by letter comics drawn by the mother. It will be released by Publishing Genius in October of next year. Here's an excerpt.

Hey Knucklehead, it’s your old man just sitting here living the high life. Thought I’d spare a minute and hoist a cold one to my favorite idiot and best goddamn pal. This one’s to you, kid aw crap I spilled and this is the good shirt sonuvaBITCH I’ll be right back— 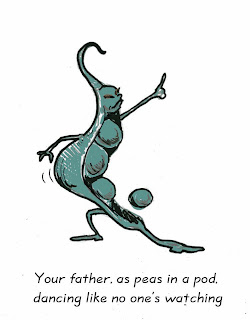 1. Set up your crock pot, get it going on high, and toss your cans of chopped tomatoes in there – NO PASTE YET! – plus the can of water and one of your beers. Not the one you’re drinking, genius.

2. In a big flat pan, also known as a skillet, heat up a big puddle of oil til it’s smoldering.

3. Once the oil is going, throw the potats and onions in and cook them til the potatoes start to get brown, probably about two songs’ lengths. Gotta STIR THE MIX every minute or so to keep the potatoes from sticking to the pan.

4. Once the potatoes are just browned—NOT TOO DARK—throw the whole thing into the pot with the tomatoes and beer.

5. Put another little puddle of oil in the skillet and heat it up. It won’t take long because the pan’s already rockin.

6. Put the garlic in the oil, stir it around and count to thirteen.

7. Add the mushrooms and the bourbon to the skillet and stir that for a minute.

8. Dump the mushrooms, garlic, and bourbon mix into the pot.

10. Scoop the can of tomato paste in and stir it til it’s all mixed in well and there are no clumps of paste floating around.

11. Crumble up five bouillon cubes in the stew, then a small sip of Liquid Smoke, stir it and let it sit, lid on.

12. Watch an episode of Game of Thrones or whatever hour-long show you knuckleheads watch.

13. Dump the Italian “Sausage” pieces in there.

14. Watch another GoT episode.

1. Cook the onion and the green pepper in the olive oil in a skillet till they're softened, about the length of a Springsteen tune, then pour the chili powder over them and stir it all around, making sure that chili coats everything.

2. Put the onions and pepper mix into a crock-pot along with the rest of the ingredients. Stir, cover and cook on low for 8 hours. Cassie serves it on a bun with coleslaw and Swiss cheese or sometimes in tortillas, but I think they taste fantastic any ole way they reach your mouth.

1. Pour a softball-sized puddle of oil in a skillet and get it cooking over medium-flame.

2. Brown the tortillas in the oil, and them put them on a paper towel to soak up the excess oil.

3. Over medium heat, cook the Salsa Verde in the skillet til it starts to bubble on the edges, then add the beaten eggs.

4. As they cook, stir the eggs into the Salsa Verde so that everything’s evenly distributed.

5. Once you notice the eggs starting to harden, add the cheese and the tortillas.

7. Serve with a sprinkle of cayenne and add some salt if you want.

3. Pull out something edible.


I have been the foreman on the line in a factory; I have proofread legal documents concerning Oprah Winfrey, the government of Aruba, and the death penalty clemency in Illinois; I have harvested cranberries; I have watched in awe as my alhzeimered grandfather, known for his prize tomatoes, mowed down an entire garden worth of tomato plants; I have taught literature, history, journalism and culinary arts in the poorest school district in Wisconsin, the oldest high school in Wisconsin, the poorest school in Illinois, including all of Chicago AND East St. Louis, and a banner school of President Obama's education policy; I have won the only baseball game played yearly in the country of Denmark with a walk-off, two-run double to right-center field; I have interviewed the inventor of the World Wide Web, the lead scientist on climate change policy in the leading country on climate change, and a prominent Palestinian hip-hop artist (three Different people); I have fallen head-first two stories onto concrete holding a roofing hatchet and only dislocated my elbow; I have been an illegal immigrant; I have been to jail; once, I was in love. Now I am trying to be an artist.