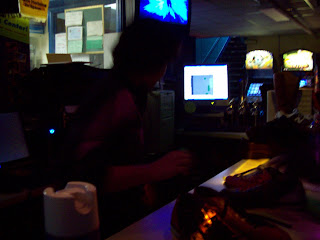 The only thing that is remembered is
redness in the dark. The slaughter at
the drive-in serves customers whose
appetites hold the spiritual accountable.
Room for dessert and an assortment
of insensitive variations
of a loving manner.

The starlight swims in the milky lake.
You can see its depth, but you can’t see
into it. Anxious and worldly, the fleshy
chromatically tuned bells obtain a
meandering course, cutting rather than
tearing, tearing rather than cutting.
A removal of merrymaking, a removal
of meat.

Time is opposed to eternity. It leans
over to one side in a headlong manner
an organized program of exhibitionist
travesty to illustrate the effect of grief
on the variable color of human flesh.
From pale to the grayish yellow
of tooth decay.

The effort to avoid omissions gives
emotional support to the irresponsible
in the face of the sphinx. The unread
books are quickly spent. Warm weather
means trouble. There is no longer life
on Mars.

When not working fulltime in the mailroom of 21st Century Machicolations, Randy Russell is busy cutting various foods out of his diet, banishing particular colors and patterns from his wardrobe, and abandoning unfinished projects. He recently gave up producing movies about: the plague and drinking, zombies and love, morning conversations in bed with strangers, and fake auditions for a non-existent drama. Furthermore, he put aside unfinished screenplays about a wedding videographer, advertising agency, sober companion, carny turned basketball player, nuclear accident cleanup, The Hardy Boys, a lottery winner, a Russian dating service, clone love story, time travel trilogy, an unlikely detective, a remake of The Sweet Ride, small time drug dealers, the war between Michigan and Wisconsin, and a guy who thinks he’s in a movie. As well as plays about the unlikely detective, amnesia and identity, and The Archies. And a long poem based on an old Philip Roth novel. He is also neglecting 43 online journals.

When not giving things up, Mr. Russell continues to work on a novel, started early in the century, based on an elaborate structure of ten authors who are also characters, existing in a plane of reality modeled after a Mobius strip which connects in the middle as a figure 8. Each of the character/authors is represented by a donut, through the hole of which he/she can enter the other authors’ reality, as a character. The projected completion date for this project is never.