from "Pee On Water" 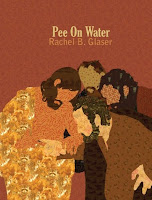 Harper dribbles the ball down the court, guarded by Ward, head fakes right, passes left to Pippen. Pippen up against Oakley, looks to see if Longley has posted, but Longley hasn't posted, Longley is tangled with Ewing. Longley’s arms curl around Ewing's arms while Longley's little eyes look to lock with Steve Jaffe's eyes, but Steve Jaffe's eyes follow the ball. Pippen drives by Oakley, then kicks out a pass to Kerr who quick bounces it to Jordan. Jordan holds the ball, Jordan's eyes twinkle. Jordan passes it back to Kerr who is alone behind the three-point line. Kerr takes a breath, grimaces, jumps the ball into a spiraling three-point attempt, which hits the rim and sails out of bounds. The spectators react and react again.

"Pee On Water" is the title story of Rachel B. Glaser's first book, recently released by Publishing Genius. The whole thing can be read online at We Are Champion. It was first published in the NY Tyrant. Glaser lives in Western Massachusetts.